Richard (Dick) Frey has retired from KCC’s board of trustees after 20 years of service. 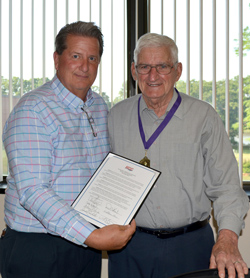 A Kankakee resident, Frey served on the board from 2001 to 2021. Before being elected to the board, Frey was a KCC staff member and administrator, from August 1969 until retiring June 30, 2000. His roles as a KCC employee were mainly as registrar and Dean of Adult and Continuing Education, though he held other titles.

KCC will host a reception to honor Frey in August 2021.

“In his time as an employee here at the college, Mr. Frey’s impact was significant in almost every program and systems we have in place now,” said KCC’s president, Dr. Michael Boyd. “He’s been a part of the college from the very beginning, and through this level of commitment he has gained so much insight and awareness of how KCC serves students. That’s also what makes him a great supporter of the college as a member of the board of trustees. Through his leadership and guidance, we’ve been able to achieve such high levels of quality in our services. He’s made a lasting impact on everything we do here.” 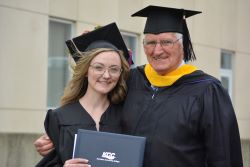 “Dick’s value to the work of the trustees can’t be understated,” said Brad Hove, chairman of the KCC Board of Trustees. “As KCC’s representative to the Illinois Community College Trustee Association and our legislative liaison, he ensured that our practices locally reflected state-wide expectations. His engagement at that level really raised the bar for expectations here in our community.”

Frey was involved in the establishment of both KCC and Parkland College in Champaign. At KCC in the early 1970s, Frey helped structure the curriculum, build class schedules, and set up a student financial payment system, among other accomplishments. He supported KCC athletics throughout his career. He served as play-by-play announcer and voice of Cavaliers basketball for 30 years, and at times he volunteered as the team bus driver.

As a member of the KCC board of trustees, Frey served as the college's Illinois Community College Trustees Association representative and legislative liaison from November 2003 until he retired from the board. In this role, he shared information with legislators at the local, state and national levels on issues related to community colleges, their programs and students.

Recently, Frey was also instrumental in the implementation of Association of Community College Trustees’ Diversity Equity & Inclusion initiatives at KCC.

“I loved working with community college students, especially the adult education students,” Frey said. “It’s very rewarding when students complete their education and go on to lead successful careers and lives. I’ve enjoyed my roles at the college because I know that the work was impactful. There wasn’t a day that I didn’t love going to work. KCC has made a difference for so many people. Being a part of the college certainly had a positive impact on my life.”

When discussing KCC’s successful impact in the community, Frey defers to others he’s worked alongside. “In my 20 years on this board, I’ve been blessed with the opportunity to work with so many other trustees whose focus is on service and student success. I’ve also been privileged to work with three of KCC’s college presidents, each of whom did amazing things to ensure the progress of KCC.”

Frey and his wife, Nicky, have six sons. Five of them are KCC graduates. Nicky Frey is also a KCC alumnus and retiree. She was director of KCC’s Respiratory Therapist program. 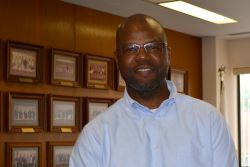 At the June KCC board meeting, Michael Proctor was appointed to complete Frey’s term on the board. Proctor is Manager, Bulk Utilities at CSL Behring. He holds a bachelor’s degree in occupational safety from Murray State University in Kentucky and a Master’s in Business Administration from Olivet Nazarene University.

“Receiving this appointment is a real honor,” said Proctor. “KCC is well-known and respected in this community for delivering high quality instruction, and I’ve witnessed this excellence first-hand watching my daughter graduate from the college’s nursing program. I’m eager to collaborate with the other trustees and with Dr. Boyd as we lead the college into the future.”

Proctor, his wife Demetra and their youngest daughter Maya reside in Bourbonnais.