Saturday’s graduation at Kankakee Community College will include four employees from CSL Behring, the first to complete a new apprenticeship program. 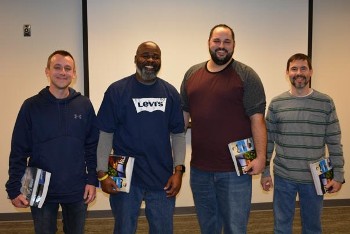 Peter Dato II, Jammie Shell, Christopher Gottschall and Ronald Mantooth (left to right in the photo) will become the first employees of CSL to successfully complete a three-year apprenticeship program that is a cooperative effort between the industry and KCC. The program means a better trained employee for CSL and a more rewarding job with a brighter economic future for the men.

“To build our talent pipeline and keep the operations running smoothly, it was imperative to think creatively about building internal talent,” says Sara Regnier, CSL’s Occupational Health Services Manager. Regnier was a Human Relations Business Consultant at CSL when the program started.

“The apprenticeship program is a win-win for both CSL Behring and the employee,” says Regnier.

CSL and KCC worked hard to make the program as convenient as possible for the workers. Paul Carlson, the Dean of Business, Technology and Human Services at KCC, explains the CSL had tuition reimbursement for the employees. In addition they were on the company’s clock while in class and all books and supplies were paid for by CSL.

But that doesn’t mean it was easy.

Thirty-five year-old Chris Gottschall was studying for the class while he and his wife Hailey were raising three children under the age of 10: Emmett, Eli and Mia. When Chris started in class, Hailey was pregnant with the youngest, Mia, now 2.

Jammie Shell, 44, and his wife Jolan have two daughters. He’s also heavily involved in his community, serving on the board at Sun River Terrace and as a member and former president of the Shrine Club. Yes, he’s one of the fellows who rides the motorized camels in parades.

He wound up with a lot of late night studying. If the family was traveling anywhere, wife Jolan would be driving and Shell would be hitting the books while riding shotgun.

Both men say a lot of people helped them get through, including patient wives. Thanks also go to Regnier for helping to start the program, they say. Their supervisor, Bryan Cross, has also been very supportive.

But they also studied together as a group and learned from each other. They would often arrive 45 minutes early for classes, which were generally held on Tuesdays and Thursdays, so they could review together. Gottschall is strong in math, helping others when that came up.

Both add that the training has opened up work for them. Before, the workers basically had one job. Now they do many. Shell says he has done HVAC, pneumatics and engineering. “Every day is an event,” he says. Gottschall says he used to dread doing the same thing day after day. Now he can do fabrication, welding and maintenance among others.

“Everything about my job is better,” Gottschall says. Before, he would carry stress from work home. The stress level is way down now.

KCC’s Carlson says that while the apprenticeship program is open to a wide range of businesses, so far CSL Behring is the only local taker. “If others are interested, this is available to them,” Carlson says. “We have a wonderful working relationship with CSL,” he adds.

Admission into the program begins with seniority. If the worker wants to apply there is also a math and English test at KCC. If the candidate passes that, a mechanical aptitude test follows.

Carlson says that there are 10 employees in the program now, with this cohort of four being the first to graduate. It is, he adds, not just a vocational degree. Students take the same general education classes as everyone else, including English and math.

Carlson describes the coursework as a mixture of traditional textbook learning and hands-on work. Generally two days are devoted to classes, he says, 10-12 hours a week. One of the graduation bonuses, he says, is that along with certificates in Manufacturing Production and Manufacturing Industrial Maintenance, among others, the graduates get other useful knowledge along the way, like OSHA (Occupational Safety and Health Administration) certification and Red Cross First Aid and CPR (Cardio Pulmonary Resuscitation).

Carlson says the apprenticeship idea for current employees originated with the U.S. Department of Labor, but that the CSL-KCC program is “the model for the State of Illinois.”

Locally, Regnier said, CSL had been working on the concept with is bargaining unit. The idea was reinvigorated at a Manteno Chamber of Commerce luncheon where apprenticeships were discussed.  Ladonna Russell of the Grundy Livingston Kankakee Workforce Board set up a roundtable discussion with Carlson and with KCC’s Michael Boyd, who would eventually become president there.

A cross-functional committee followed at CSL Behring, with Human Relations team members, managers and supervisors of the trade skills area and technicians from the bargaining unit working with KCC on curriculum, class schedules, mentoring and student orientation.

The result was a program, Shell said, where “CSL financially made it so we literally had no excuses not to succeed as long as we did our part.”

There are always moments, Carlson said, where people approach the mile markers in their lives and someone lifts a lantern to help them.

“It has been so awesome to help them,” he says.