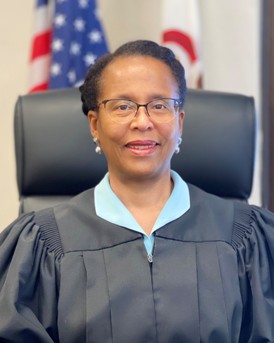 The Honorable J. Imani Drew is the presiding judge of the Juvenile Division of the Circuit Court of Kankakee County, and the first female African-American judge in Kankakee County. She was appointed an associate judge for the 21st Judicial Circuit in 2016. Judge Drew represents the Third Judicial District as a member of the Illinois Judicial Conference.

Already holding an undergraduate degree from Illinois State University, Drew was in her 20s and a single mother when she packed up her teething, 1-year-old twins and moved to Iowa for law school without a place to live, a baby sitter or a car. There, she earned a juris doctor degree from the University of Iowa College of Law.

“A longtime attorney in Kankakee, Judge Drew, has “always been a trailblazer and leader within the legal community, overcoming many obstacles on her road to becoming an attorney” writes the Illinois State Bar Association. “The odds were against her as a resident of Chicago’s Southside, yet she prevailed.”

In Kankakee County, Drew began her legal career in 1982 as a Reginald Heber Smith Community Law Fellow with Prairie State Legal Services. She also worked as a prosecutor in the Kankakee County State’s Attorney’s Office, in various positions including civil division chief and chief of the sex crimes division; as a municipal law attorney for the City of Kankakee; and as a consumer law attorney for the Illinois Attorney General’s Office. Prior to taking the bench, Drew was chief of the Juvenile Division for the Kankakee Public Defender’s Office. Before and after becoming a judge, Drew taught as an adjunct professor for KCC’s Paralegal/ Legal Assistant Studies Program.

Drew is licensed to practice law in Illinois and before the U.S. Supreme Court.

As an assistant state’s attorney, Drew worked in partnership with law enforcement and agencies providing victim services. She has served as past president of Harbor House, trained volunteers for KC-CASA and developed the protocol for videotaping child victims of sexual assault and abuse for the Children’s Advocacy Center.

Through Drew’s efforts, the Kankakee County Juvenile Court is nationally recognized as an Implementation Sites Project through the Office of Juvenile Justice and Delinquency Prevention funding and the National Council of Juvenile and Family Court Judges.

Drew notes her professional and personal inspirations are, “my nearest and dearest mother, grandmother, and godmother.” Additionally, Drew is inspired by Jane M. Bolin, America’s first African-American female judge; Constance Baker Motley, civil rights leader and first African-American woman to serve as a federal judge; and the beautician who lived next door when Drew was a young girl, “as [she] sat on the floor [she] would part and plait or curl my hair while telling me enchanting stories of life’s possibilities.”

Drew provides this inspirational comment and advice for others: “Treat your mirror as your best friend. Every day give her a smile and tell her how wonderful, beautiful, capable, and blessed she is. She will simultaneously empower your words and imprint them back on you.”