For the third year in a row, former KCC basketball player LaMont Robinson has been nominated alongside a number of NBA legends for the Naismith Memorial Basketball Hall of Fame.

Robinson–sometimes called "The Comedy King of Basketball," and "Showboat"–already was inducted into the American Basketball Hall of Fame (2019). 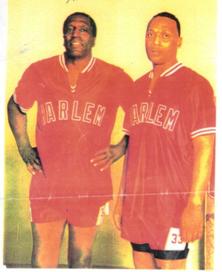 Robinson played for the Cavaliers under Coach Denny Lehnus during the 1981-82 season. He transferred to Central State University. Robinson had a professional playing career of 28 years  playing barnstorming basketball in over 75 countries and played in over 3,000 games with the Harlem Globetrotters and his own teams "ShowBoat" Robinson's Harlem Road Kings and "ShowBoat" Robinson's Harlem Clowns. He is shown at left, with Meadowlark Lemon.

In a news release, Robinson said it is a great honor to be the only non-NBA player on this year's nominee list, which includes players like Kobe Bryant, Tim Duncan, Kevin Garnett, Chris Bosh, Shawn Marion, Michael Finley, Tamika Catchings and Swin Cash.

A press conference announcing the Finalists from the North American and Women’s committee for the Class of 2020 will be held during NBA All-Star Weekend in February in Chicago. The entire Class of 2020 will be unveiled during the NCAA Final Four in Atlanta in early April, and the enshrinement ceremony will take place in Springfield, Mass., Saturday, Aug. 29.