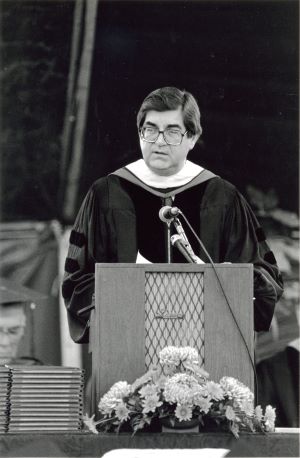 Horton became KCC president on Jan. 1, 1977. During his tenure, KCC’s credit enrollment increased by more than 50%, and the continuing education enrollment increased more than 160%. The college also became the local administrator of the Comprehensive Employment Training Act, predecessor of the Workforce Innovation and Opportunity Act. During Horton’s presidency, the college expanded program offerings and paid off its mortgage.

Many changes made during his time are still evident on KCC's Riverfront Campus. One example is that Horton obtained an Illinois Arts Council grant for KCC, which enabled the acquisition of Illinois artists’ paintings to grace the halls, classrooms, and offices, as well as financed purchases of some exterior sculptures for the campus grounds.

Horton worked with the KCC board of trustees to bring about several building renovations that improved the learning and teaching environment for students and faculty, and the college’s first activities/athletics building was constructed during his tenure.

Horton also worked with the University of Illinois Landscape Architecture 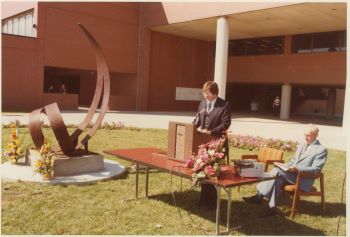 Department to have a comprehensive plan for landscaping and tree planting – which they did at no charge. In addition to beautification of the college, a “prairie acre” of native Illinois vegetation was developed on the west side of the campus. This area was dedicated as the “L.H. Horton, Jr. Prairie Acre” at the time of his retirement from KCC in 1987.

“It was my pleasure to have worked with Dr. Horton at Western Illinois University, the Illinois Community College Trustees Association, and finally for 10 years at KCC,” said Dr. Larry Huffman, who became KCC’s president immediately after Horton. “He was one of the brightest people I've ever known, and I was fortunately able to learn a lot from him over the years.”

In a September 1978 profile for the KCC student newspaper, Horton said his main job as president was to “provide quality education opportunities to everyone in the college district.” He also said “I feel KCC has one of the better programs in the state, and that students who transfer to senior institutions do better than those entering as freshmen.”

“We tried to really work on all aspects of the campus environment to make it a better place to work, a place that students and staff could be proud of, and a place that you would want to attend,” he said. Horton also said he tried to make KCC into “one of the best small public community colleges anyplace. I think this is a school of integrity and academic quality and one of beauty.”

“(Horton) stewarded the initial funds the college has used to acquire and maintain an art collection,” said Dr. Michael Boyd, KCC’s current president. “It was Burnie's vision to develop on-campus athletic facilities so that KCC's teams could play home games on campus.”

Horton left KCC at the end of June 1987, to become superintendent/president at San Joaquin Delta Community College in California.

After KCC, he became superintendent/president, at San Joaquin Delta Community College in California from 1987-1999.  Among his accomplishments at Delta College were restoring of the campus infrastructure, constructing a child development center, increasing state-of-the-art technology, advancing educational opportunities for minority students, and raising the quality of faculty and staff.  Continuing one of his keen personal interests, he advanced Delta’s focus on the visual arts through acquisition of art works and development of the college’s art gallery, which is now known as the “L.H. Horton, Jr. Art Gallery.” He is the longest-serving president in that college’s history.

Horton retired for good in 1999, and he and his wife spent their retirement years near Stanwood, Washington, enjoying picturesque sunset views and peaceful strolls along Warm Beach. With their eyes admiring the beauty of nature that surrounded them, the Hortons became even more aware of the importance of protecting the environment.

Horton had many personal interests and particularly loved collecting, including original Audubon prints, art lithographs, coins, stamps, postcards, and historic ephemera. He also enjoyed watching sports and listening to music, with classical or opera music commonly being heard at his home.

His wife, Elizabeth, passed away in November 2019. Horton is survived by two sons, David and Lilburn (Lee) III; a daughter, Genevieve (Merrill); as well as five grandchildren and one great-grandchild. He is also survived by two of his brothers, Charles Horton and Michael Horton. In addition to his wife, he was preceded in death by his parents, a sister, Ruth Barker, and one brother, James Horton.

Horton was born on May 1, 1932 in Haysi, Virginia to Lilburn H. Horton, Sr. and Gladys (Collie) Horton. His parents soon moved to Oak Park, where he attended public schools, and as the oldest of five children, undertook the responsibility after his father was drafted into the military of helping his mother care for his siblings.

Before coming to KCC as its third full-time president, Horton was executive director of the Illinois Community College Trustees Association. He also worked at Western Illinois University in Macomb, Fort Hays State University in Kansas, Washington State University, and at a junior high in Cincinnati.

The Horton family has requested that memorial donations in Horton’s name may be directed to the student scholarship fund of the Kankakee Community College Foundation, 100 College Drive, Kankakee, IL 60901; or the Delta College Foundation, 5151 Pacific Avenue, Stockton, CA 95207.

As requested by Horton, there will not be a funeral or other services.