When you march in the military, you lead with your left foot.

Lydia Salgado leads with the words she lives by—hope, faith and courage. They are tattooed on her left foot.

In honor of Respiratory Care Week, Oct. 23-30, this is Salgado’s story.

After graduating from Kankakee High School in 2010, Salgado joined the U.S. Navy. Between graduating and leaving for the Navy boot camp in November that year, she completed the Certified Nursing Assistant class at KCC.

In Japan, Lydia met Cesar Salgado, who was also in the U.S. Navy. They were engaged after a few months, married within a year, and had two children by July of 2015.

Just a few months after Cesar was honorably discharged, they learned he had kidney cancer at the age of 25. Cesar was treated with a partial nephrectomy at Trippler Army Medical Center in Honolulu. Now cancer-free, they continue to closely monitor his health.

In March 2016, the Salgados moved to Port Saint Lucie, Florida.

At that time, Lydia also transferred to the Navy Reserves, and went to San Antonio, Texas, to become cross-rated as a Navy corpsman. Navy Corpsmen “assist health care professionals in providing medical care to Navy personnel and their families,” according to navy.com.

While training in Texas, Salgado decided to become a respiratory therapist.

In May 2017, the family moved back to Illinois and Lydia began prerequisites for the Respiratory Therapist program at KCC. Cesar also attended KCC, and he has earned an associate degree in Electrical Engineering Technology.

“The professors and the preceptors are so wonderful,” Lydia said. “They truly care about the students’ success, and make sure not only that we can pass our board exams, but that we are well-rounded therapists as we go into the work force. I gave birth to my third child, Emilia, going into my last semester of the program. I only took two weeks off in order to get back into school and clinical, but they worked with me and my schedule … as I was still recovering from child birth. I wouldn't be where I am today without them!” 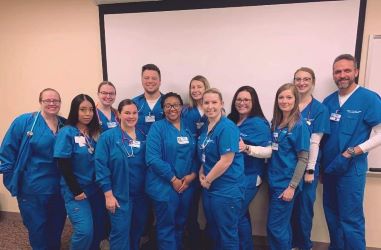 “Lydia was always willing to help her peers,” said Jaclyn Montemayer, director of KCC’s Respiratory Therapist program. “She was a student representative of the program. Her face can be found on our respiratory YouTube video. She was in my first cohort that I had for two years and always showed patience, understanding, and grace on days that I was learning myself!”

The photo shows KCC's Respiratory Therapist Class of 2019. Lydia is in the front row, third from the right.

Lydia was a peer tutor. She also earned the distinction of being on the Phi Theta Kappa All-Illinois Team, an honor earned by only two KCC students per year.

“As a respiratory therapist, you can start out in the medical field making a very livable wage with room for growth,” Lydia said. “At this time, only an associate’s degree is required, which is really nice. After two short years, you will have the start to a very rewarding career.”

“Respiratory is a very versatile career. You are not in the same area all the time, which is nice. One day you can be in the emergency room, intensive care unit, pediatrics, neonatal, and many others. It keeps things interesting and expands your knowledge in all areas.

“I had a job lined up prior to graduation, pending my boards.” She passed both respiratory therapy national board exams before the end of 2019.

As a member of the hospital’s “Hurricane Team A,” she was on duty, and stayed at the hospital, continuously for three days during Hurricane Ian in September 2022.

The hurricane displaced the Salgados for nearly a week, and further solidified Lydia’s appreciation of being a respiratory therapist.

“I was able to work through a global pandemic and a hurricane while so many in other fields were laid off,” she said. “It is a very rewarding career with excellent job security.”

The Salgados will celebrate their 11th wedding anniversary on Jan. 4, 2023. Their children are currently 10, 8 and 3. 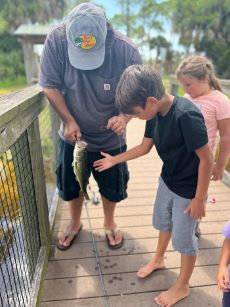 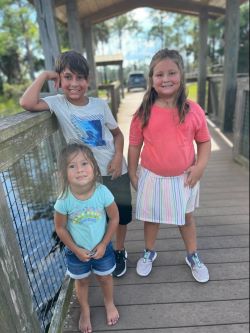 “KCC was a wonderful choice for me,” Lydia said. “While I had my GI bill and did not need to worry about the financial side of it, it is very affordable. While I was going through the program, they had the preschool open that my daughter attended, and it was such a blessing.

“The veteran’s assistance team at KCC is amazing. They made the process of using my husband’s and my VA benefit easy. After six years on active duty, going back to college is like starting all over again and they made the process as easy as possible as I transitioned into civilian life.”

KCC offers an associate degree in Respiratory Therapist, which prepares graduates as competent advanced-level respiratory therapists able to care for and treat patients of all ages suffering from breathing disorders. Graduates may also be involved in diagnostic testing, clinical supervision, and decision making.

The two-year program includes theory and clinical practice. It is accredited by the Commission on Accreditation for Respiratory Care.

Twenty students can be admitted into the program each spring semester. Applications for 2023 entry are currently available. For application criteria or other information, call Jaclyn Montemayer at 815-802-8842, email jmontemayer@kcc.edu or submit a request at info.kcc.edu.