The community is invited to learn more about pioneering people who hailed from Manteno, including one woman whose work led to laws that granted property and custody rights to married women in the 19th century.

The event, “Manteno’s Famous Forgotten Past” will be a live webinar from 1-3 p.m. on Thursday, May 19. The presenter is Melanie Holmes, a Manteno native and author of "Manteno" (Images of America line, Arcadia Publishing, 2020).

“Manteno,” covers the area now known as Manteno, which was populated by the Potawatomi before those considered “founders” of the village moved in. Holmes said that writing “Manteno” revealed some of the most amazing—albeit previously unknown or forgotten—figures in U.S. history.

“Most towns sprout a famous person or two, and Manteno is no exception,” Holmes said. “Unfortunately, some stories are forgotten, and that's especially true of women's stories.”

On May 19, Holmes will discuss Elizabeth Packard, whose husband had her physically removed from their Manteno home in June 1860, and put her on a train to Jacksonville, west of Springfield, where she was committed to an insane asylum based on his word alone, as husbands were able to do at that time. His reason was that she disagreed with his religious views.

“What followed made history,” Holmes said. “After three long years, Packard got out and found herself homeless, childless, and penniless. Married women had almost no rights at the time, and it's because of this woman's battle that laws were passed across the U.S. to protect married women's property rights and those of the mentally ill.” 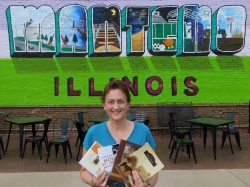 The two-hour webinar will cover Packard's fight, as well as a couple of other “notables” who hailed from Manteno. Holmes will also touch upon the timeline of the Manteno State Hospital, which operated on the town's eastern edge from 1930 to 1985.

Holmes is a graduate of Manteno High School. She has a certificate from KCC and a bachelor’s degree from St. Xavier University in Chicago. She is an award-winning author of four books, including “A Hero on Mount St. Helens: The Life and Legacy of David A. Johnston” (University of Illinois Press, 2019).

Before setting off as a writer, Holmes spent the bulk of her career in the business world, including working for the Kankakee County Extension Service, U.S. Environmental Protection Agency, Arthur Andersen, and Brookfield Zoo.

The class is presented by KCC’s Continuing Education Department. The cost to attend is $19. To register online, visit kcc.edu/comejoinus, sign up or login, then find and select the course. Click on the date and add it to your cart. Within the cart, checkout. To register by phone, or for more information, call 815-802-8206. The class does not award college credit.

Within 24 hours of the program, registered participants will receive an email with instructions for joining the virtual event. It will include tips for joining your Zoom meeting. You will need a computer or mobile device, sound and an internet connection.